Yucalandia just published an article regarding the changes in Mexican tax laws affecting foreigners for 2014, which we thought might be useful:

Here’s a summary of the changes in Mexican tax laws affecting foreigners for 2014. This report comes from Lic. Spencer McMullen, a fine attorney in Jalisco, who specializes in legal issues affecting expats. You can contact Lic. McMullen at Chapala Law.

On 11/29/2013 Lic. McMullen reported: ”Very extensive reforms have been made to Mexico’s tax laws and have been finalized in November, 2013. These become effective on January 1, 2014, which does not give people or businesses a lot of time to prepare. This short lead time may cause problems for some people. First, all the appointment times at our local SAT offices in Jalisco (SAT = Mexico’s tax department) are filled for quite a while, and second, some of the changes affect banks and businesses quite a bit. I think it’s going to be a messy transition as many will be unable to comply in time with only 2 weeks left until the government goes on vacation and returns January 2nd when the new laws take effect and even then there may be delays of weeks for people to be able to get appointments at the tax office to set themselves up or make changes.

There are new IVA sales taxes

It’s now going be 16% nationally (whereas it’s been about 11% in the border areas), and it will include taxes on soda, chewing gum, and pet food throughout Mexico. Those weren’t included in the past. So, people with pets should stock up at Costco before the new year. Dog shelters will be especially hard hit. For people driving back from up north after Christmas, or coming back from nationalizing their vehicles at the border, they’ll want to fill up their tanks near the border, where the gas tax will still be 11% until the end of the year.

Will anything change at customs (Aduana)?

The mandatory use of customs agents for any value of goods to be imported has been eliminated. The use of an agent will be optional, which is a good thing because they’ll have to be more competitive in terms of rates and the quality of their service.

Also, customs is going to be checking the value of imported goods more closely and communicating with the countries where merchandise is leaving, to check declared values. People may be more likely to get caught if their car nationalization pedimento say the car is worth just $10,000 pesos, while it clearly is worth much more.

What about new banking regulations?

Those taxes have now been eliminated. But… banks are now required to report to SAT any deposits over $15,000 pesos, and any payment of credit card debt of $20,000 pesos made at a time. SAT may also audit you and compare your credit card expenditures to your declared income. They can then contact you to explain these transactions within a certain time frame. If you don’t respond within that time frame (say, 20 days), they could establish liens and levies. And, of course, you wouldn’t respond if the address they have for you is old.

All of this means that it is very important for people to make sure their bank has up-to-date home addresses and email addresses. This is especially true for snowbirds. It also means that snowbirds will need to check their email frequently while they’re out of Mexico.

Also, banks will require people to have an RFC (tax ID number) in order to open a bank account. They have enabled the ability to get an RFC number online, but people first need a CURP number which has to be processed through immigration (INM). (Editor’s note: If you already have Residente Temporal or Residente Permanente, you have been issued a CURP number.) With offices closing for several weeks for the holidays, people may have problems in getting CURPs in January and may have to wait until February to open the account.

Anything new for businesses?

Yes, the current process for small business reporting (REPECO) will be eliminated. Currently, small businesses report their gross earnings every two months. For January, that will still be the case in order to report earnings for the November – December months. After that, there will be more paperwork. The process will come through the regular tax system. This means that earnings will need to be reported, and so will deductions, and facturas (invoices) – just like big businesses do today.

As before, the tax rates continue to fall between 2% and 35%. Note that there will be more paperwork, requiring a greater mastery of Spanish. My office will help people by getting them set up and familiar with the new system.

Another change is the elimination of the business IETU tax (single-rate flat tax started in 2007). Non-profits will start being required to be authorized by the SAT to receive donations, which would allow them to continue preferential tax treatment. That’s obviously going to be critical for them. They should probably start that process immediately, and try to get their major contributors to donate before January 1st.

The most controversial of the new business regulations is probably the requirement for electronic facturas and the elimination of paper facturas. The new rules also require giving all employees online facturas (CFDI) rather than paper facturas when they get paid, in order to be able to deduct their wages. That system may not be ready by January 1st, by either the SAT or the businesses, so that’s going to create a lot of problems.

What about tax changes for investors and real estate owners?

Mexico has caught up to many other countries and will tax capital gains on the sale of stock at a rate of 10% as well as tax dividends at the same rate of 10%.

For real estate sales there will be a maximum capital gains tax exemption pegged using the UDI index (investment units) with a new limit of 700,000, which equates to about $3,500,000 pesos, so any gains over that amount from a sale will be taxed. The prior limit was 1,500,000 UDIs with that exemption waived if one could prove they lived in the home for the preceding 5 year period.

That’s a lot of changes. There are more… (The changes listed above) are just the ones that I think will affect expats the most. SAT is also firming up the tax code in other ways. They did some research to determine where and why they lost tax court cases in the past, and have now plugged some of the advantages taxpayers had in court. I’ll know more the 1st week of December, so I can give you an update after I go to another 5 hour tax update class.” 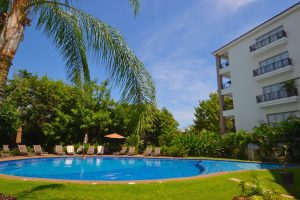 Nayri Ocean, located in Bucerias, a seaside town with 8 kilometers of white sand and blue waters, is renowned for its folklore, food and its